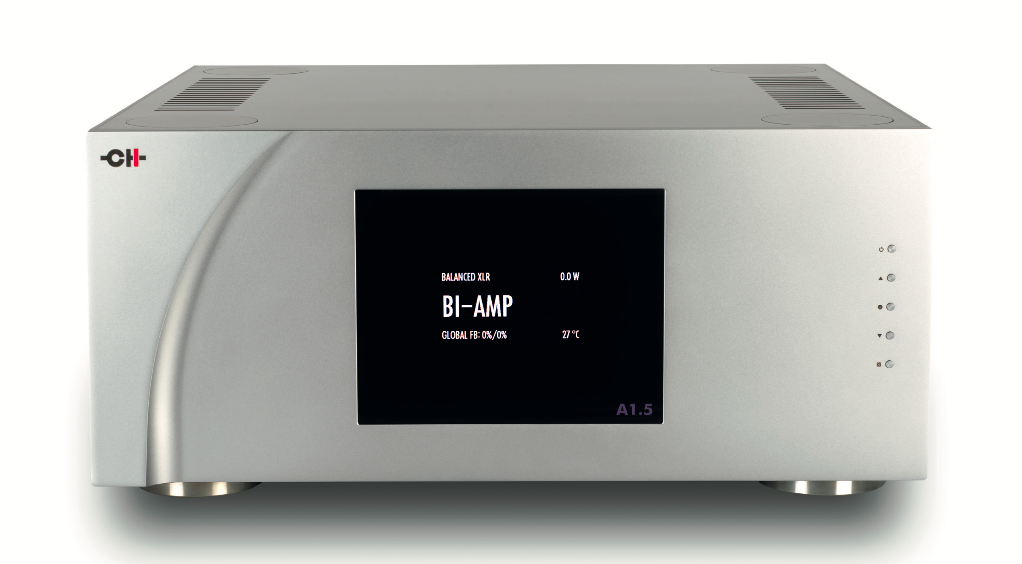 Steve Earle’s ‘Copperhead Road’ opens with a monster chord that sounds like a something big and very dead, crashing to the oor of the studio. It’s the sort of heavily compressed thud to send a shudder through the whole room.

Most amps get the weight and the thud. Some can separate out a few layers within the thud. A very select few can isolate the bass drum, the rest of the kit, the bass guitar and the keys. CH Precision’s A-1.5 is one of those – and it performs this aural sleight of hand while delivering all the thuddiness of that thud with the best of them. That’s the beauty of the A-1.5; it does more than you expect – without you noticing the doing.

This may be CH’s smallest power amp, but don’t let that fool you. There’s a lot more behind that beautifully nished

fascia and xing-free casework than meets the eye. At £31,800 the A-1.5 seems compact, even petite for the price – until you try and pick it up. Those super-smooth chassis panels enclose a grunt inducing 47kg of hardware, capable of generating anything up to 800-Watts continuous output into a 4 Ohm load.

CH has never been one of those me-too companies. Their modular approach, both to constructing or specifying components and system topology sets them rmly apart from the crowd. How is that re ected in something as simple as a stereo amp, with its single sets of inputs and outputs? Well, like I said, there’s an awful lot going on behind that beautifully sculpted fascia. Those ve buttons to the left of the display allow access to the menu driven control software – and a host

of con guration options. In fact, users can de ne everything from the information appearing on the display to the colour of the text. You can’t choose the font, but that’s probably a simple oversight on the part of whoever wrote the code! What you can choose (or change at will) is what sort of ampli er you want the A-1.5 to be, with options that include: a straight 150W into 8 Ohms stereo; 150W in a bi-amp con guration (where both channels receive the same signal from a single input); high-current 275W or bridged-mono 550W output topology. Naturally, it is equipped with both balanced and single-ended inputs, as well as a pass-through for multi-amp set ups. The gain and global feedback ratio (damping factor) can even be set for each channel independently and, if you know you don’t need it, you can dispense with the second input card and save a bit of cash.

Think that through and it quickly becomes apparent that this is an amp that not only rationalises infrastructure by minimising cable requirements, it can grow with or adapt to changes in your system. The relationship between amp and speakers is the most complex, intimate and demanding in the entire audio chain, but the A-1.5 is uniquely con gurable to meet those demands – even if they change. Of course, such sophistication doesn’t come cheap, but although the initial cost might seem high, there’s serious value in that adaptability. Every time you change a component in your system it costs you money – not just to buy the new unit but in terms of the loss you suffer selling or trading-in the existing one. But with the A-1.5, your can recon gure your existing amp to meet

changing system requirements – a potentially signi cant saving that’s not to be sniffed at.

None of that cleverness would count for much if the A-1.5 isn’t as musically adept as it is technically accomplished. Often when it comes to audio components, the all-rounders pay for their versatility in terms of ultimate performance. But that is to misunderstand the concept behind the CH components. These aren’t one-size- ts-all products. They are products that can be uniquely con gured to meet speci c requirements – and there’s a world of difference between one-size- ts-all and one product that can be adjusted to t, maximising performance in any given situation. In fact, once you experience the CH approach, especially if you get to experience it in a range of system contexts, you’ll wonder why all amps aren’t built this way?

The A-1.5 has been in-house for a while and that versatility is re ected in the sheer range of speakers it has been used with, from Raidho’s diminutive but demanding TD-1.2 to the benign and sensitive Living Voice OBX-RW3s, the Wilson-Benesch Resolutions, the Wilson DAWs, with their appetite for power and control, and the low-sensitivity, wide-bandwidth Gershman Grande Avant Gardes that just like power. In each case, the A-1.5 was more than up to the challenge, the adjustable gain and damping factor allowing me to dial in the amp not just for the speaker, but the various different pre-amps too, meaning that I could always set the system to work in its optimum range, maximising the performance potential.

“What it has in spades is the priceless ability to simply get on and get out of the way.”

On rst listen it’s easy to assume that the A1.5 is solid- state lean – except that the sheer range (rather than the intensity) of tonal colours tells you that isn’t so. Listen longer – and listen to other amps – and you soon realise that the CH isn’t lean; like he rest of the range it simply adds little or nothing of itself to the signal. There’s no cuddly warmth or rounding, no leading edge emphasis and just the slightest reduction to a note’s harmonic tail. It might lack the absolute dynamic and low-frequency authority of the bigger M1.1 – and the acoustic dimensionality that goes with it – but that’s a relative judgement when compared to the very best and it’s de nitely no slouch. But what it has in spades is the priceless ability to simply get on and get out of the way. It possesses an easy, effortless power delivery and lucid, unforced clarity. No spot-lit or etched soundstage here, just a natural sense of space and separation, an ability that lets you hear through the densest mixes or sort out the most ill- disciplined bands (yes Pogues, that means you). Hang it on the end of a decent source and it’s a potent combination, bringing presence, immediacy and intelligibility to the music and the performance, an overall sense of shape and pattern. So that, when you listen to the live performance recording of the Karajan/Bumbry/Vickers Carmen [Orfeo C 866 183 D] the incidental noises, rustling and chat from the vast cast, along with the underlying rumble of feet falling on the stage is not just separated from the singing, it actually adds to the event, populating, anchoring and helping de ne both the acoustic and the action. Okay, so most studio recordings don’t suffer that sort of intrusive background noise, but the ampli er’s ability to sort and make sense of sound, whatever its source still applies – with a vengeance.

Almost 40-years ago I remember hearing the Krell KSA-50 for the rst time at Jimmy Hughes’s. He played the Rickie Lee Jones track ‘Easy Money’ and the amps and MG3 speakers served up an almost spookily realistic impression of the singer and band. The KSA-50 might not have been the biggest or the best amp in Krell’s line, but it single-handedly rewrote audio expectations in the UK. In many ways, CH Precision’s A1.5 could or should do the same. If you listen to it in direct comparison to an existing product you might feel that it sounds at or lacking in drama – but listen on and learn. After fteen or twenty minutes your ears will have attuned

themselves to its linearity and lack of undue emphasis. More to the point, you’ll nd yourself listening to the music rather than the amp. Swap back to the previous unit and you’ll likely be astonished by just how clumsy, exaggerated and lurid that amp you always loved now sounds.

CH Precision’s A1.5 might be the company’s smallest power ampli er, but it’s de nitely the complete package. Getting out of the way may not seem that impressive, but this amp gets out of the way better and more completely than anything short of its bigger brother, the M1.1, doing so with a combination of unintrusive musical excellence and calm, communicative coherence and clarity. It’s neat, relatively petite, and very, very discrete. Sonically all but invisible, it still speaks with a voice of both authority and delicacy, as deft as it can be brutal. As an amp, it might seem to be hard to pin down or ascribe a character, but that’s its beauty. What it does have is that most essential of attributes, musical generosity, always seeking the sense and purpose in a recording rather than pulling it apart. After living with the unadorned honesty, unbridled enthusiasm and self-effacing excellence of this most modest of audio components, it’s awfully hard to go back. Doing (almost) everything an amp should, and almost nothing it shouldn’t, maybe all amps really should be built this way.